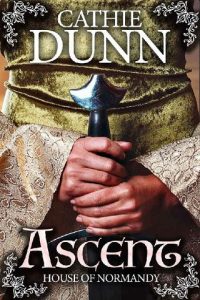 A brutal Viking raid heralds the dawn of a new, powerful dynasty: the House of Normandy
Neustria, Kingdom of the West Franks
AD 890

Fourteen-year-old Poppa’s life changes when Northmen land near Bayeux. Count Bérengar, her father, submits to them, and she is handfasted to Hrólfr, the Northmen’s heathen leader, as part of their agreement.
To her relief, Hrólfr leaves immediately in search of further adventures, only returning to claim her years later. In the face of retaliating Franks, they flee to East Anglia, where she gives birth to their son and daughter.
After their return to Neustria, Hrólfr’s new campaigns strike at the heart of Frankish power, and King Charles of the West Franks offers him a pact he cannot refuse. In exchange for vast tracts of fertile land in Neustria, Hrólfr must keep the peace, convert to Christianity – and accept marriage to Gisela, the king’s illegitimate daughter.
Poppa’s world shatters. She remains in Bayeux, with her daughter, Adela. When Gisela arrives one day, demanding she hand the girl over, to be raised in Rouen, Poppa’s patience is at an end. But Gisela makes for a dangerous enemy, and only one woman will survive their confrontation high up on the cliffs.
Who will succeed and become the matriarch of the House of Normandy?