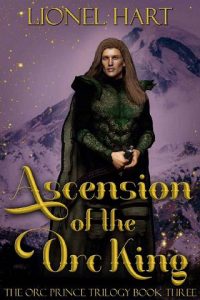 With Taegan held captive by the merciless warlord Hrul Bonebreaker, can Zorvut reach him before it’s too late?
Their worst fears have come to pass. Taegan has been captured by the orcs, and Zorvut knows that going after him will be playing right into the warlord’s hands. His only hope of outmaneuvering him is to enlist the help of King Ruven and the elves.
Imprisoned in a dark cell, hungry and cold, Taegan knows he can’t take on a city of orcs by himself. But imprisoned alongside him is an unexpected ally: Zorvut’s mother Naydi, who wishes to be free just as much as he does. Even with their combined forces, is there any hope of escape?
Despite all their efforts even after they’re reunited, there are still threats lurking outside of their view. How much more will it take for Taegan and Zorvut to know peace? Does their dream of ending the conflict and uniting their nations have a chance of success anymore?