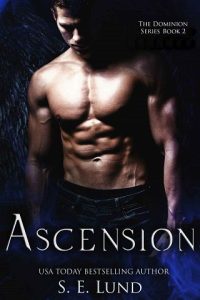 Eve Hayden had no idea what to expect the night she went in search of a translator for an 800-year old French illuminated manuscript but it certainly wasn’t what she found — Michel and Julien de Cernay: 800-year old identical twin vampire brothers – beautiful, temperamental opposites, both wanting her for themselves.

Michel — dark, brooding, control-freak, former priest who broke his vows the night he was turned into a vampire. Julien — impetuous, valiant, passionate, a brave knight who lost his life on a battlefield when a vampire claimed him.

Caught between the two brothers, Eve searches for the truth about her mother’s death, her birth, and the fight to prevent Dominion – vampire rule over humans. Eve’s mother gave her life to keep Eve safe, but was unable to protect herself. Now, Eve can’t escape this fate nor can she escape them — even if she wanted to.
This is her story.
Now, in the days after he leaves for Pittsburgh to rescue Julien, Michel plays a dangerous game of power with an ancient enemy.
Eve is the prize.

NOTE: Intended for 18+ due to explicit content and language.