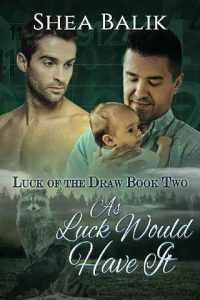 The paranormal world was slowly becoming extinct and the leadership, the Consilium, were desperate. A plan was hatched to put a spell on all singles to mate them with someone from the opposite sex in order to procreate. All they had to do was draw a name out of a bag and the mating bond would begin. They were positive their plan couldn’t fail. Then again, they had no idea the fates had been watching and decided paranormals, especially the Consilium needed to be taught a lesson.
One that wouldn’t soon be forgotten.
Keyne Hume called bullshit on the Consilium’s spell. He didn’t believe for a moment that fate would allow them to interfere in the grand design. But did he trust fate enough to pull a name from the bag?
Marek Lenox hadn’t been happy with his life for quite some time. When fate intervenes and gives him the mate he’d always hoped for, does he have the guts to hold on and enjoy the ride?
Stunned to find out what fate has in store for them, they must find a way to protect their secret at all costs, especially from the leaders who didn’t want them to be together. Fortunately, for them, they have three women on their side who are the Consilium’s worst nightmare.