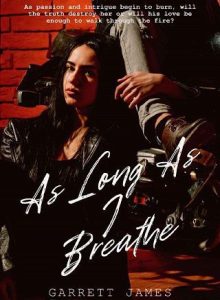 As Long As I Breathe by Garrett James – Free eBooks Download

Devastated, after her fiancé Matt is murdered, Stephanie Morgan finds herself trapped in a violent, abusive relationship with Cole Miller, the local Sheriff’s brother! Untouchable and ruthless, Cole takes pleasure in Stephanie’s tears!
In quiet desperation, Steph yearns for a way out for herself and her precocious 7-year-old daughter, Lily. When Mason Cain rides into town on his all black Harley, she barely lets herself dream of the possibilities! Until his presence ignites her passion, fueling loves burning desire!
Ex-military, ex-con, bad boy Mason Cain lives up to his reputation, not because he wants to but because he has to! For most of his life people have seen Mason in only one way, bad! That was until Steph and Lily came into his world, through the tattoos and rough exterior they see the gentleness within the beast!
As love burns, so does the fire of jealousy! Mason must once again release the beast from its cage to protect the girls that he loves!