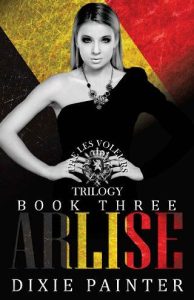 The final chapter of Les Voleurs begins now! Greed and selfishness have a strong foothold in Belgium; who will be left standing after the final battle of this war?

Arlise Maquet
Les Voleurs was my family, and I would do anything to protect and serve that family, as the second-in-command of the syndicate. I’ve earned my place, and built walls to ensure I stay there.
But even the strongest walls have a few cracks. I can’t let those cracks grow or allow the darkness to win, especially when we’re so close to finally being free of the last remnants of the Block and the Lefevre Syndicate.
At the Bass’s order, I’m being paired with an outsider, an officer of the law. Rhys Offermans is a distraction and weakness I can’t afford. weaknesses. is going to cost me a lot more than I’m willing to pay. And that cost might include Rhys.

Rhys Offermans
As part of the Federale Politie, I’d been directly involved in laying a major blow to the Block. While it wasn’t ideal to work with a syndicate while being an investigator with the organized crime unit, sometimes it paid to know which enemies were the lesser of all evils.
Now, though, I’ll be getting up close and personal with Arlise Maquet, the second in command of Les Voleurs. I’d never met a woman as capable as Arlise. Beautiful and deadly dangerous—a heady mix that I’ve wanted to sink my teeth into since that first meeting. My time to get on her good side is limited and growing smaller with every new discovery. Not everything is as it seems, and the past has a bad habit of turning the present into a dark nightmare.