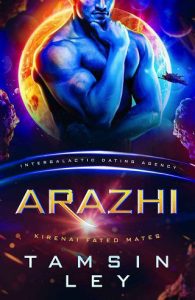 This alien bought a date at a charity auction. Now he thinks he owns her.

Purchased by a prince
When the Intergalactic Dating Agency hires Georgie to plan the first ever human-alien matchmaking soiree, Georgie thinks a charity auction for the local animal shelter will be the perfect ice-breaker. But to get the local singles to participate, she has to set an example, so she offers herself as one of the dates.
What she doesn’t expect is for her alien buyer to be so freakin’ hot. A few drinks in, and Georgie finds herself alone on a spaceship with a blue-skinned, muscle-bound male.

Misunderstood matchmaking
The Kirenai shapeshifters are known for the pleasure they give their bedmates, and Prince Arazhi is no exception. When his family insists it’s time for him to produce an heir, the last thing he wants is a jealous, power-hungry female weighing him down, so he heads to Earth. Human females are supposed to be pliant and fertile, willing to bear children without permanent bonds.
There, he spots a female with a regal bearing that makes his blood thrum hot. Better yet, it appears that she’s for sale.

But when Georgie not only refuses to be owned but also claims to be barren, Arazhi must choose. Will he follow his heart, or fulfill his duty?