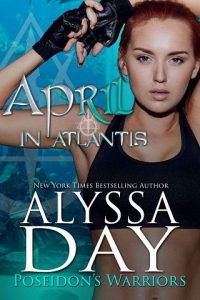 She’s Poseidon’s first and only female warrior…
When April, Poseidon’s first-ever female warrior, meets Pine–“don’t call me a werewolf” — prince of the European wolf shifters, she saves his life and then gives him the finger, because the sound of his sexy Scottish accent when he said “I think I’m in love, lass” gave her shivers in places shivers had no right to be. She’s a warrior, not a werewolf groupie. But now she’s trapped between the werewolf who wants her and the werewolf who wants her dead.

He’s Europe’s werewolf prince…
Pine wanted April the moment he saw her, just before she saved his life. Then he knew he must make her his. But the appearance of his long-lost and presumed-dead twin complicates Pine’s plans, and this time it’s April’s life at stake. Together, April and Pine are so much stronger than they are apart, but the heat between them may be enough to burn down the world.

Can two such unlikely allies find their way past danger to love? Or will mutual seduction be the beginning of the end?