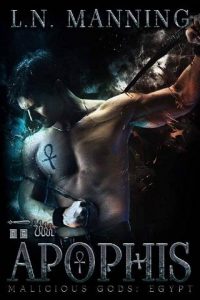 Dylan Moore was a loner, passed around from group home to group home by the system, where the children in those types of facilities had often been given up willingly to institutions or orphanages. That was why Dylan kept to himself, not making friends with the other residents in them. If he didn’t get close to anyone, he wouldn’t mourn them when he was moved again. Except for the last home he was in, he did make a friend. One friend, Zach. The two young men became fast friends and did everything together, even after they both aged out of the program.

Dylan had never felt love, loss or desire of any kind to be with anyone, until Zach dragged him to the new gay dance club in town. The moment Dylan stepped through the door; a desperate need washed over his body leaving a trail of sparks racing across his skin. He felt an uncontrollable need to rub on and touch every person in that bar. And he didn’t know why.

Apophis had lived for over five millennia, born of an unholy incestuous mating of his parents, that many of the greater Gods thought abominable. So the greater Gods got together and cursed Apophis and his twin brother Ra. One can only be awake while the other rests; and this was Apophis’s turn.

Apophis felt a presence in his club that he hadn’t felt in many centuries. He just couldn’t quite but his finger on what or who it was, but could that person be his, at least until he found another? And will Dylan ever be able to accept his true nature?