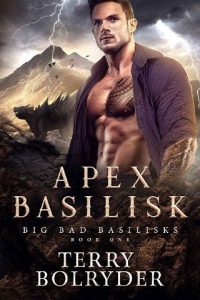 For most of his life, Gunnar the basilisk has spent his time as a gigantic, fearsome monster, defending the wild Texas landscape from invaders and rival shifters. Now that he and the other basilisks have awakened into the modern world, they’re on a new mission: to find mates, and help bring peace to a world growing more chaotic by the day. But when a simple assignment in a small town brings the stoic, silent Gunnar face to face with an easily-frightened woman in dire need of his protection, the beast inside him roars to stay by her side, whether she likes it or not.

April Nelson’s life in the quiet town of Clawson’s Creek is anything but normal. For starters, shifters aren’t a secret to the humans there. And to make things worse, the bear and wolf shifters living in town have been fighting for years. When the feud leads to a deadly attack that nearly kills her, she finds an unexpected ally in a tall, gorgeous man with one red eye and one blue eye. Gunnar, the basilisk, a man of strength and secrets, whose handsomeness is matched only by his obsession with protecting her. Even against her own wishes.

When it’s clear Gunnar isn’t going to leave her alone with a town full of angry shifters fast on her heels, all April can do is let him into her life. But Gunnar has found his mate, and between saving her life multiple times, and heated nights beneath the autumn sky, the attraction and the drama between the two of them is reaching a fever pitch. And though April may have found her new reason to carry on with her difficult life, the forces clashing in Clawson’s Creek look like they won’t permit her a happy ending until her basilisk protector has dealt with all of them.