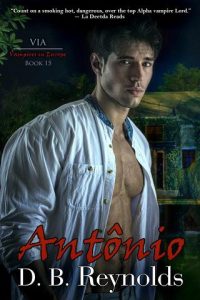 Porto, Portugal—home to writers and poets, to revolutionaries and dreamers. And down the river to the sea, a grand estate rises on green hills of latticed vineyards—the home of the powerful and deadly vampire who rules Portugal.
Darkly handsome and charming, Lord Antônio Silveira is a warrior at heart. But his future was warped in an instant when he defended his Sire against overwhelming odds and emerged not only victorious, but the Vampire Lord of Portugal in his own right. It was a title he never sought, but one he will defend to the death.
Rachel Shepherd knows nothing of loyalty or family. Abandoned by her powerful mother to be raised as an orphan, she is chosen to serve an ancient society as an assassin, a weapon to be pointed and fired with always fatal consequences. But Rachel has begun to question those who command her to kill, and when they send her against a vampire lord known for his ferocious battle skills, she begins to wonder if maybe, this time, her superiors are hoping she’ll die trying.
Brought together by a threat to both their lives, Antônio and Rachel join forces to reveal their true enemies and drag them from the shadows, where together, vampire and assassin will decide who lives and who dies, and ensure an end to their enemy’s poisonous intrigues. It is time at last for the hunters to become the hunted…