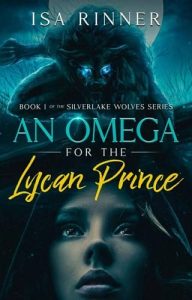 This is the first book in a series called “Silverlake Wolves”, though it can be read as a standalone.
~~~

Sweet and kind Annalise has just started her college life. As an Omega she-wolf, she doesn’t have high expectations in life or love. Happy to spend her days with her friends and family, her life gets turned upside down when she meets her mate. Strong, powerful and of high rank, he is the exact opposite of her.
Liam is a high-ranking Lycan, firstborn son to the Alpha of Silverlake pack, expected to take over the pack. Known to be distant, cold and of incredible strength, he has been searching for his mate for years. When he coincidentally accompanies his younger brother to his college event, he finally stumbles over her.
When Liam and Annalise meet it’s like two worlds are colliding. Annalise is certain that a powerful Lycan like Liam will instantly reject a weak Omega she-wolf… won’t he?
While there are people who are not happy about such an alliance, she soon realizes that the biggest battle is the one against her own insecurities.

~~~
Disclaimer: The book contains scenes of an adult nature, including mature scenes, sexual encounters and strong language. Not meant for anyone under the age of 18.