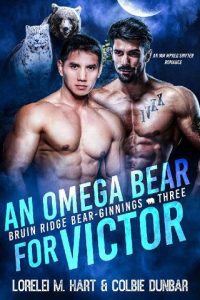 Victor thought it was all a dream—until he discovered that it wasn’t.

Alpha cheetah shifter Victor grew up rogue, living his life among humans. When he starts dreaming of pack life, he brushes it off. He’s fine living his life solo. He doesn’t need to be surrounded by others like him to find his worth. Besides, he just finished his residency and has offers from some of the best hospitals in the country. So, why is he feeling the pull to answer a call in the mountains—in a bear den of all places? When he accepts a job and is on his way to the city, he finds himself driving through Bruin Ridge territory. What could it hurt to stop by and check it out?
Omega bear shifter Brian loves all the changes that he’s seen in his den. What was once a place where omegas were treated as less than is now a place where true equality reigns. When a stranger comes to see about taking over as Healer, Brian scents his true mate. His bear is thrilled, and so is he—that is, until he’s slapped in the face with the truth: Victor is moving to the city in a week. He’s never had any intention of becoming Healer. What good is a mate if he’ll ask you to leave everything?
Brian isn’t willing to stick around and find out, taking his fur and hiding until the fancy city doctor takes his leave.