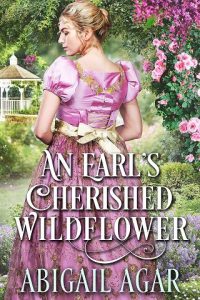 Miss Alina Goodwin has always enjoyed a comfortable and happy life, until her father’s untimely passing leaves her and her mother with an unbearable debt. Alina will inevitably have to be employed by the wealthy Duke of Griffinstead, to assist his younger sister in deportment, etiquette and music. Within a short space of time, she finds herself mesmerised by him and whatsmore, those feelings seem to be mutual. Her world, however, turns upside down once again by an infuriating accusation of deceit…

Will she disappear forever, ignoring the signs that a genuine love was about to bloom?

Frederick Tomlinson has returned from war with a heavy duty to carry. As well as the title of the Duke of Griffinstead, he is also now responsible for his younger sister and her future. His prayers for a suitable companion for her are answered by the arrival of Miss Alina Goodwin, whose angelic voice and striking beauty stir his heart for the very first time. Yet, he is already betrothed to Lady Honoria Richardson, a pious woman who will try her best to drive Alina away from the manor. Her success however will not dissolve Alina’s divine figure from his mind…

Will he eventually comply with society’s rules and let his heart down?

As two different worlds become entwined, Alina’s and Frederick’s true love grows, and yet, a divisive and jealous presence drives them apart. In the end, will they break all the barriers that stand between them, or will internal battles and outside forces overpower them? After the truth is finally revealed, will they dare to give love a second chance?