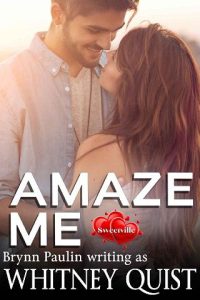 Two years into his marriage, everything is falling apart. It’s crumbling so badly, his wife, Mimi has moved out and the D-Word is being tossed around. Everyone says he and his high school sweetheart wedded too young. As far as he’s concerned, there’s no such thing!
With school and work and running his family’s farm with his brothers, things have been off-kilter. But he’s not giving up, he’s not saying goodbye, and he’ll do whatever he must to prove he’s all in. But is Mimi all in, too? That could be more of a problem.

Hang on tight for high emotions in this sweet, closed-door romance.