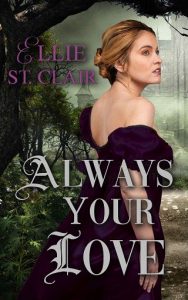 Lady Hannah Blackburn has always been an obedient daughter, doing exactly as she is told. So when her sister runs off with a footman and her parents decide on a hastily arranged marriage for her, she agrees. Then she kisses a stranger in the library on the same night her fiancée has a tryst of his own and suddenly everything changes.

Lord Edmund Marshville, a former soldier and the second son of an earl, has one desire — to be left alone with his scars and his memories in his remote Hollingswood Estate. When he gives in to his mother’s plea to attend his brother’s engagement party, he doesn’t realize how life altering one night can be. For when his brother must marry the woman he compromises, suddenly Edmund takes on the role of groom to his brother’s original bride, a role he has no wish to assume.

When Hannah and Edmund return to Hollingswood, it doesn’t seem like they will ever be married in anything more than name, until they begin to uncover secrets hidden for decades. Will attempting to reunite lost loves help them find their way to each other, or do the fates have other plans for them?