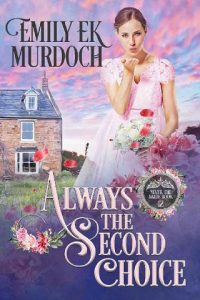 Olivia Lymington never liked her sister, but twins are always supposed to be close. Now Isabella is engaged to the charming and handsome Colin Vaughn, Duke of Larnwick, and Olivia is forced to act as chaperone until the big day. That’s why, when Isabella goes missing, the entire Lymington family considers it Olivia’s responsibility to find her wayward twin.
Colin Vaughn, Duke of Larnwick, is tired of waiting for Isabella to become his bride, and now she’s gone, he’s outraged. He’ll track her down if it’s the last thing he’ll do – and make her marry him. But the journey is throwing up some unexpected surprises; namely, the delectable identical twin sister of his missing bride.
It’s out of the shadows and into the spotlight for Olivia but she’s hardly eager to accept the attentions of a Duke she knows will have to marry her sister. He’s determined to fight his desire. She’s not convinced that he really understands she is not Isabella. It’s a war of wills and is it possible for the two of them to win – or for disaster to fall on them both.
Can Olivia accept that she is no longer second choice, or will Colin’s appreciation for the second Lymington twin be his own undoing?