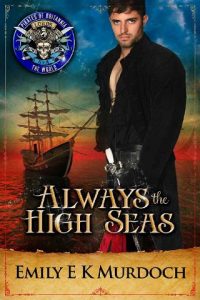 Esmeralda le Brecque had never been handed anything on a plate. She’d had to take it, and as the leader of the rebellious faction of Poseidon’s Legion, she was one of the most mysterious pirates still terrorizing the English seas. The ocean consumed her, body and soul, and had done for every one of her twenty years. But never in her three years as Captain of the Periculum had she ever had a stowaway.

Javier Mateo de Soto hated the sea. Born into a minor branch of Los Demonios de Mar, his father had offered him a chance to escape life on ships and start a new one on dry land. All he wanted was Esmeralda le Brecque in chains. He had underestimated her. Caught and thrown in the brig, only a mutiny can force Esmeralda to seriously consider making the intruder her second in command until they make port. He had never expected to be caught. She knew he was a danger to herself, her family, and her ship.

When a woman’s word is law and a gentleman’s place is in the brig, there’s only supposed to be one outcome.
Neither of them are willing to admit to the swelling passions overwhelming their reason. Two warring families, one in love with the pirate life, one desperate to escape it. Is this what they call ocean sickness?