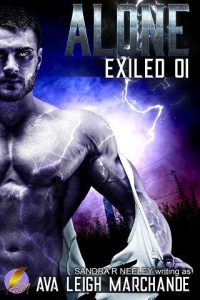 This story has been written for those readers who prefer a story with ‘closed door’ intimacies and less violence. While the characters face issues an adult reader would identify with, there are no graphic intimacies or foul language, and very little violence.

Delaney is a young widow struggling to find her way after the death of her husband. It’s been more than a year, but still, she feels so alone. Left with a small parcel of his family land and the home they lived in together, she finds herself the target of family members that want her gone so they can take possession of the little bit of security her husband left her. Not usually one to run, or back down from a fight for something she believes in, she’s finding it hard to continue to fight this battle on her own. Little does she know, help is already watching and has decided to step in.
Exiled from his home planet and people for nothing more than doing the job he was assigned to do; Walker counts the hours until they return to take him home. All he has to do is keep his head down, hide his true identity from any who live in this world he’s been dumped in, and abide by the other rules that apply. He’s hoping his people come soon, though. He’s taken notice of a human female, and he finds himself drawn to stand between her and the struggles she’s facing. As long as he’s on Earth, no one and nothing will harm her no matter what he has to do to protect her — even if it costs him the chance to return home.

*This is a SciFi Romance from Ava Leigh Marchande, a pen name of Sandra R Neeley.