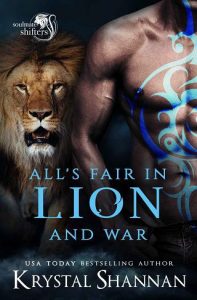 He’d already had his great love and lost it. So when a twist of fate throws him into a situation with a women who is glowing with the soul call, Saul doesn’t know what to believe. Especially when said woman is being held captive by the very same tribe that murdered his first mate—the Ka’lagh.
All bets are off and all Saul’s claws come out.
The tribe is under attack. Their secrets. Their lives.
Not only do they have to deal with a cruel tyrant leading a band of marauding lions across Denali, they have an entire clan of dragons following behind the lions, threatening chaos and destruction in their wake.
The Ka’lagh are stealing females.
But the only female Saul is interested in is already mated. And she’s a queen and would never have anything to do with him.
Then there’s the problem of her damaged memory and the fact that she can’t remember the last three hundred and sixty-five days of her life on earth. She thinks she’s still on Reylea. Still the queen of La’Tar.

All’s Fair In Lion and War is the seventh book in the Soulmate Shifters in Mystery, Alaska series. It’s a full-length, action-packed standalone fantasy paranormal lion-shifter romance story featuring a queen who never gives up and a slightly gruff and stoic alpha male lion from another world with a compulsion to protect and pleasure his second chance at happiness. Happily-ever-after and more guaranteed!