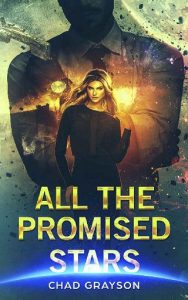 Five years ago, Will Corwin promised his family that he would come back to serve their Noble House, if they allowed him the time to pursue his career as a journalist. Now, that time is almost up, and the promise is due. Will travels to the war-torn Amara colony to interview the half-alien leader of a resistance movement, who might hold the secret to lasting peace, his last story to file. But fate intervenes, and when he meets a devout healer, Sister Amelia, their attraction cannot be denied, despite her vow of celibacy, and the fact that his mother has already arranged a marriage between him and another woman, upon which an alliance depends.

For the last nine years, Amelia Warren has been a sacred healer for a holy order. But family crises, as well as the fated meeting with Will Corwin, make her reconsider her life choices. But leaving the order is not an option, as Sisters who leave must give up their powers, which inevitably leads to painful withdrawal and eventual death.
As the war heats up on Amara, can Will and Amelia defy duty and tradition and establish a relationship, or are they destined to say goodbye before they can even come together?