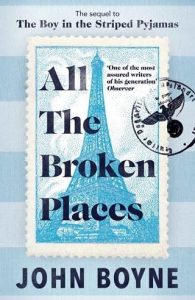 Then, a new family moves into the apartment below her. In spite of herself, Gretel can’t help but begin a friendship with the little boy, Henry, though his presence brings back memories she would rather forget. One night, she witnesses a disturbing, violent argument between Henry’s beautiful mother and his arrogant father, one that threatens Gretel’s hard-won, self-contained existence.

All The Broken Places moves back and forth in time between Gretel’s girlhood in Germany to present-day London as a woman whose life has been haunted by the past. Now, Gretel faces a similar crossroads to one she encountered long ago. Back then, she denied her own complicity, but now, faced with a chance to interrogate her guilt, grief and remorse, she can choose to save a young boy. If she does, she will be forced to reveal the secrets she has spent a lifetime protecting. This time, she can make a different choice than before — whatever the cost to herself….