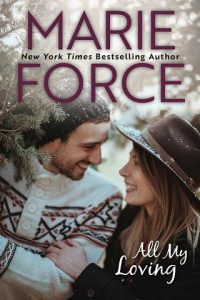 It’s mud season in Vermont, and things are getting dirty…

Landon Abbott and his identical twin brother, Lucas, always shared everything—until they laid eyes on Amanda Pressley and both wanted something only one of them could have. All it took was her pretty little mouth uttering the words “prostate massager” during a sales pitch at his family’s Green Mountain Country Store in Butler, Vermont, to make Landon’s heart stop and other parts of him jump to attention. Unfortunately, his brother felt the same—or at least he did. Now Lucas is head over heels for Dani and her daughter Savannah, and the path is clear for Landon and Amanda. Except that even with her staying with him, nothing is happening, and Landon isn’t sure how to change the status quo.

Amanda is making a list and checking it twice. Nearly dying in the fire at the Admiral Butler Inn has left her with tons of regret and a new lust for life. Topping the list of things she wants to do with her second chance are two key items—fall in love and have an orgasm with a man. The last person she expects to check all her boxes is the world-renowned player named Landon Abbott. She might’ve made the mistake of saying yes to dates with both brothers once upon a time, but only one of them makes her heart pound. Too bad she can’t figure out how to move off the starting line toward something more than friendship with the ridiculously handsome firefighter.

When she needed a place to stay after the fire, Landon was first in line to offer his home, and now that she’s sleeping in his bed, he’s determined to show Amanda only one Abbott brother is capable of helping her achieve her goals. Things are heating up in Butler this spring as Landon and Amanda find just what they’ve been missing on the road to happily ever after. But like mud season in Vermont, that road is full of potholes as a long-buried secret from Amanda’s past and Landon’s plethora of female admirers threaten their newfound happiness. Return to Butler, Vermont to catch up with the Abbotts, the Colemans and Fred the Moose, and find out if baby Dexter the Moose has found his way inside Hannah’s house yet.