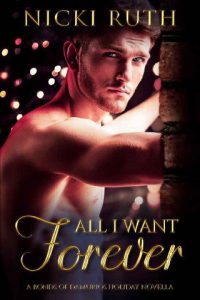 All I Want Forever (Bonds of Damurios #5.5) by Nicki Ruth – Free eBooks Download

A special crush,
A determined pursuit,
One magical holiday romance.

“Tobias. Do you…I mean…would you go out with me? Tickets. I have tickets. To a game.” Riley could kick himself.
This was all wrong. He’d gotten flustered. But the way Tobias had been looking at him…
And continued to look at him. But the heat he’d seen smoldering across from him was gone now. Steel gray orbs stared back at him, devoid of any emotion, like a plane of hard glass.
Then the reply came on a deep timbre that warmed him all over. But unlike the other times, his heart fell into a pit in his stomach.
“No.”
Riley has a secret crush. One so far out of his league, he’ll need to pull out all the stops just to get his attention. But Riley is determined to have Tobias, the royal guard tasked to be his bodyguard. And Tobias doesn’t make it easy. He’s not interested in a young vampire fledgling. Besides, what does Riley have to offer? He’s young, and inexperienced, and hasn’t a clue how he’ll seduce the royal guard and make his claim on him.
Tobias guards Riley as a favor to the powerful vampire family he works for. The last thing he needs is to dally with the newest and youngest member of the clan, lest he lose his head. Yet, the heat of Riley’s sapphire gaze and his steadfast pursuit makes him hard to resist. Tobias yearns for a taste of the youngling but doesn’t understand why Riley would want a hardened and jaded soldier like him.
It’s vampire Christmas and for Riley, it’s his one last shot to convince Tobias they belong together. But can the magic of the holiday open Tobias’ heart to him, and will Riley be granted his greatest wish, one he’ll always want forever?