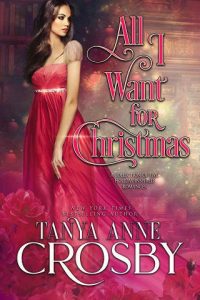 Thirty Ways to Leave a Duke
Suspecting he can never be the man Emma Peters wishes him to be, Lucien Morgen, the fifth duke of Willyngham, decides to break off their long-standing engagement… only to discover the innocent fiancé he set aside for years has unexpectedly blossomed into a passionate, irresistible woman. As the family counts down to Christmas, everyone else seems to realize Lucien and Emma are truly meant to be–except the oblivious couple. With the help of some very mischievous children, Emma and Lucien are about to discover that a little mischief beneath the mistletoe might just open their hearts to love.

The Art of Kissing Beneath the Mistletoe
Once upon a time, Alexandra Grace Huntington believed in fairy tales. She oohed and aahed over gowns from Courtauld’s, never wore black unless in mourning, always minded her social graces, and never, ever indulged her inner bluestocking. Now her world has come crashing down. Her best friend had it right all along, and the Universe had seen fit to reward Claire with, of all things, a crown (quite literally). However, while Lexie once aspired to the same, she has changed. When she’s unexpectedly invited to celebrate one last holiday with her best friend, she can’t accept quickly enough… only how did one comport oneself after everything that was said and done?

MacKinnons’ Hope
Eleven years later, Hugh FitzSimon is a broken man. He is forsaken, alone, a wretch left to wallow in his grief. A scrooge to rival Ebenezer, he is visited by the ghost of his dead wife, who has come to reveal what life has been, what it could be, and where it will end if the candle burns out before FitzSimon has made amends. Meantime, in the Highlands, the MacKinnon clan faces their darkest hour. With their village destroyed by fire, and winter on the way, how can they rally when whispers of war have already begun? A very unexpected “ghost” may help them find their way.For years fans have asked for a MacKinnon’s Bride epilogue and here it is, a short story to lend a little cheer for the holidays.

The Holly & the Ivy
Malcom MacKinnon has been gone from Chreagach Mhor for more than ten years. He’s never met the youngest MacKinnon, but while he’s looking forward to their first meeting, Alexander Ailbeart MacKinnon isn’t quite as enthusiastic to meet the brother who, in his eyes, abandoned their clan. Having received word Malcom and his new wife are on the way, he’s on his heels now, making sure their home is safeguarded from forces that threaten his family’s joy. Will the brothers finally come together after so long?

One Knight’s Stand
Bound for a marriage she hopes will save her cousin from the gibbet, Lady Elizabeth Louise Wolfe finds herself en route to Scotland to marry the younger son of a known traitor to the Crown. Fate intervenes when, on the way, she checks into an inn and registers as the “MacKinnon’s bride.” Presumed dead at Culloden, Callum MacKinnon, stops by the inn as well, intending to clean up before his return as the prodigal son. Imagine his surprise to discover his “bride to be” has already procured a room. And more—the feisty sassenach everything he never realized he desired.