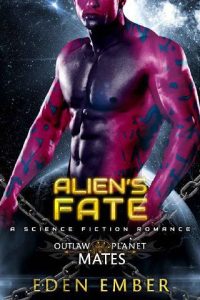 His muscles have muscles and even though he looks human he’s a purple alien!

Claire just wanted to help the small island off the coast of South America with her newly obtained microbiologist degree. One second she’s boarding the plane to take her to her new life, the next second she loses consciousness. She travels far away.
Out of this world.
Her eyes open to the hunkiest man dressed as a purple alien telling her she crash-landed on the planet. He tells her she’s the alien and this isn’t planet Earth.
She believes he abducted her, as in an alien abduction.
What now?
Derix’s spaceship crashed on the prison planet over a year ago. All he wants to do is fix his spaceship and escape until the human crashed near his camp. Until she needed him to save her. Now all he wants to do is make her his.