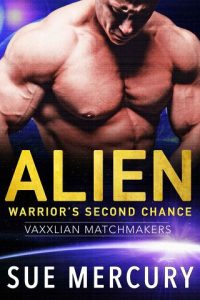 Warrior Zorras always takes what he wants—and he wants her.

When Karla flees Earth for the safety of planet New Vaxx, the last thing she expects is for one of the huge aliens to show an interest in her. Yet the sexy Vaxxlian warrior named Zorras keeps coming around, and he even threatens to kidnap her. Good thing she’s a fast runner. She tries to convince Zorras he’s wasting his time—she’s too old to have his children—but this news doesn’t deter him in the least. He insists she’s the loveliest female he’s ever seen and claims he recognizes her as his one true mate. But even if he’s telling the truth, Karla is nervous about mating with a Vaxxlian. Her first marriage wasn’t a happy one and she never planned to marry again—let alone enter an everlasting mating bond with a bossy, Vaxxlian warrior. She’ll just ignore the handsome alien and hope he goes away. Yep, that’ll work. Or will it?

After losing his first mate during the war, Zorras longs for a second chance. The lonely widower doesn’t care that Karla can’t have offspring—he only wants her. He’s convinced they’re soulmates, and he keeps trying to make her visit Vaxxlian Matchmakers so the psychics can verify what he already knows. Surely if one of the psychic matchmakers tells Karla that Zorras is her one true mate, she’ll agree to become his wife. But the pretty human is frustratingly strong-willed and refuses to do as he says. Maybe he’ll follow through with his threat to kidnap her, after all. What could possibly go wrong?