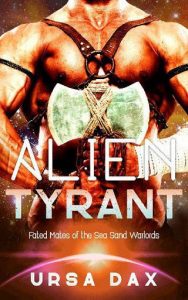 “If you should flee, no matter where you run, I will always follow.”

CECE: I thought getting a linguistics degree would land me a decent job, not get me shipped off to an alien planet ruled by barbarian warlords with tails. But that’s exactly what happens when my own government kidnaps me, along with a bunch of other women, and drops us on a brutal desert planet in the name of research. But the mission goes wrong. Because of course it does. Soon enough I’m separated from the other humans and stuck with a seven-foot-tall alien warlord who will not leave my side. He doesn’t speak English, but his dark eyes and massive body speak volumes. I need him to survive and find my friends. But am I willing to give him what he wants when what he wants… is me?

BUROUDEI: When I saw the face of my future fated mate in the sacred Lavrika pools, she was unlike anything I’d ever seen. I thought that fate was wrong, or that maybe I’d gone mad. But then when she falls from the sky, crashing into my desert, my fate becomes my reality. She is small, and pale, and fights me every chance she gets. But everything in me calls to everything in her, and she represents the salvation of my tribe.