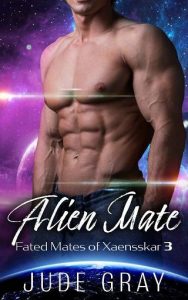 Fate decided long ago that Iscer and Zyva belong together.

Good thing Fate loves a challenge, because the cold mercenary and the woman who hates him may be her biggest challenge yet…
After she attacks her tentacled Aktovi owner, kills his wife, and escapes the city of Agroeos, Zyva Tanza knows her time on Xaensskar is coming to an end when she’s quickly and violently captured. Treated and held in a hospital in the city of Brighmin, all she can do is wait for a fate that will, for her, be worse than death.
But Fate has something else in store for Zyva.
She’s aided by a kind Drimuti female who tells her about a place called Corsov, and Zyva runs once again–only this time, she has a place to run to.
But the cruel man who’d enslaved her is not about to give her up, and he knows one sure way to get her back.
He hires XCRU.

Iscer is a mercenary of the group XCRU, and when he’s hired to do a job, he does the job–no matter what. He doesn’t let his feelings interfere. Ever. Some might say he has no feelings. And he might agree with that.
When he goes after a fugitive who escaped the law–twice–he doesn’t care that she’s female, or that she’s a slave, or that the man she tried to kill believed it was his right to hurt her. That’s not his concern. He enjoys the chase, true enough, but in the end, completing the job he accepted is all that matters.
She leads him on a wild chase, gaining his respect–and maybe a little something more–along the way.
Still, he’ll capture her, return her to her master, and never think of her again.