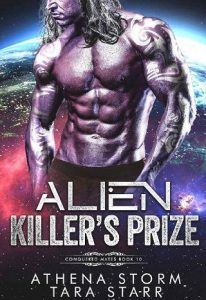 As a deadly AI terrorizes and tries to conquer their broken world, two hearts find their fates intertwined…

Torvex isn’t like other Kraaj.
This Kraaj killer is not quick to hate humans like many of his kind.
There’s one human he’s particularly intrigued by.
She hates him.
But he wants to mate her.
Merissa.
She’s a human weapons smuggler bent on getting justice for her father, who was executed by the Kraaj in the early days of their brutal occupation of her world.
When this Kraaj and human woman collide, there’s an even bigger enemy they have to focus on.
Merissa has to rethink everything she’s ever believed about her oppressors.
Torvex has to figure out how to woo a human woman dealing with a lot.
Because he has to have her.
But can she just give up on vengeance?
Even if her heart begs her to forgive, can she forget?
The future of two races are in their hands. Will their love save the planet they both live on?
Or will it lead to the destruction of everything they hold dear?