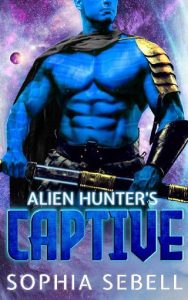 They told me I’d go into the wormhole. In and out, two hours. Then I’d get an enormous amount of money. They didn’t tell me something might come out of the thing first.

Just as I was about to enter the wormhole, a terrifying monster emerged and took control of my mind. Before I could release it onto the unsuspecting Earth, a huge blue beast of a man came barreling out of the wormhole and tackled the horrifying creature.
Long story very short, the three of us wound up somewhere we should not have been. The monster escaped and I was left alone with the blue man, Zaltas. He barely had on clothes and the tight pants he wore could barely contain all that he had to offer, his bulging calves, thick thighs, and well…
One big problem, we can’t talk to each other and I have no clue what he has planned for me. The look in his eyes when he stares at me is fiery. Passion, care, or lust. I don’t know which.
I panicked. It was a new world and I was stuck with an alien, it’s to be expected, okay? I tried to run from him, but I didn’t get far. He saved me, once again, from a bizarre creature stalking the planet’s surface.
Now, he has me tied up and has been carrying me on his thick shoulder. He’s clearly trying to protect me, maybe he really does have my best interest in mind, or maybe he’s saving me for something else. I’m starting to wonder if I’d really mind either way.