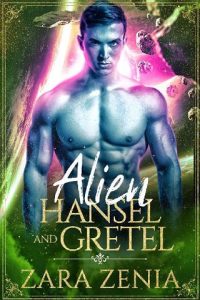 An alien nobleman seeking his Earthly mate. A pagan witch ostracized by an entire town. A twisted kidnapping plot designed to interfere with the Trilyn race’s fight for survival.
Prince Nadarr has watched other nobleman from Trilynia find their mates on Earth, and now, it’s his chance to do the same. Only, he isn’t the best driver, and he and his twin sister, Gelissia, crash land in remote Wisconsin.
Using the tracker designed to pick up the genetic signature of women registered in the Brides Program, they find themselves on the doorsteps of a small sweet shop in an isolated little town run by a beautiful witch with a dangerous reputation.
While Nadarr is immediately smitten with Cassandra, the townspeople don’t trust her, and neither does his sister. And when Gelissia is kidnapped and witnesses claim Cassandra was behind it, Nadarr finds himself torn between the two women in his heart—his sister or his future mate.
But when the truth is uncovered, it reveals an even more sinister plot than Nadarr even imagined, one that threatens the entire future of the Trilyn people. Can Prince Nadarr save his sister and his love, or will the forces intent on stopping the aliens from reviving their future succeed?