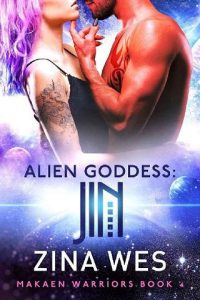 No good deed…
JIn absolutely loves her job, working as a pilot and aerospace engineer. But it has it’s lesser moments. For instance, when a friend implores her to fly across space and pick up the son of a Makaen senator from a holiday planet. Even though Jin would much rather poke herself in the eye with a rusty nail, she very reluctantly agrees. What sounded like a straightforward task ends in total chaos. Soon she realizes that there’s more to the senator’s son than meets the eye. And to survive the pandemonium she finds herself in, Jin has no other choice than to place her trust in this exceptional–and also annoyingly alluring alien.
To the outside world, Noan is the frivolous youngest son of the prestigious Prem-kai Bakan. But his laid-back attitude is nothing more than pretense. No one knows how much the secret he’s forced to keep hidden torments his spirit. Unlike his brothers, Noan is destined to live a lonely and solitary existence. At least, that’s what he believes until Jin crashes into his life. The human female manages to turn his entire world upside down. Even though she fights their attraction, Noan is adamant to prove he’s worthy of being her mate. And the best way to start is by annihilating their common enemies.