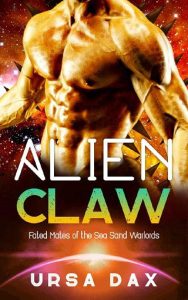 TAYLOR
As the resident historian, I’ve been recording everything that happens on this alien planet. Alliances, battles, and, of course, the whole alien/human mates phenomenon. But soon, there’s a new name to add to the list of human lasses with mates: mine. I, Taylor Bruce, apparently have an alien fated mate. And not just any mate – the biggest, strongest monster of the Bitter Sea army wants to claim me. Ten feet tall and covered in golden scales that glint like armour, Tok looks more like something from a nightmare than a dream come true.
But when Tok tells me there’s an ancient alien records-keeping system back at the Bitter Sea to explore, I put aside my reservations and jump at the chance to travel there.
With him. Alone.
The more time I spend with this golden behemoth, the more I can’t help but imagine his claws on my skin, his fangs at my throat…
As I get to know him… It’s not that he becomes less monstrous.
It just turns out I have a wee bit of a thing for monsters.

TOK
I will win my mate’s love to me. Grim and Kor were able to do the same with their women. I, strongest warrior of the Bitter Sea army and right claw to the king, should have no trouble with such a task.
But my beautiful mate is of the strong and stubborn sort. I need to earn her trust, learn her ways, and get her to open up to all I offer her. So I take her on a trip away from the settlement to the Bitter Sea coast. She wants to see the ancient records there, and it gives us time to be alone.
The further we get from the settlement, the closer we become.
And the more I learn about my lovely little mate. For example, the fact she’s scared of me. At first it bothers me, but then I realize it shouldn’t. Why?
Because she likes it.
Taylor likes the frisson of fear I drive under her skin.
I will happily play the predator for her.
I can be whatever she wants me to be.
Her love.
Her mate.
Her monster.