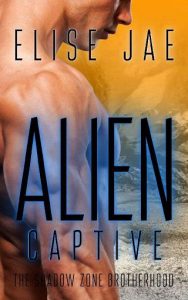 Arc:
The caldera is getting crowded, the monsters ever more fearless, and my biggest problem–my biggest temptation–just fell out of the sky. I’ve spent months working up the nerve to leave, but I can’t go anywhere until I’m sure she’s safe… until I’m certain she doesn’t want me either.
Christina
I wasn’t supposed to leave Earth. I wasn’t supposed to crash land on an alien planet. And I definitely wasn’t supposed to wind up in the arms of three sinfully delicious Sian men.
But all of that did happen, and the sinister machine that brought me to them has something to do with the monsters, their Maker, and the fate of the Brotherhood as they know it.

Shock:
The three of us chose to take the furthest range, to live as far away from the others as possible, because we know what we are, even if the others may have forgotten. Because we made a choice and have to live with it every day. But it seems the Maker we killed may not have stayed dead. And if we don’t clean up our mess, the old man’s machinations might do more than kill us. Because she has to choose.
Risk
The others joke that I can see the future, but something none of us are ready for lurks in the dark of the caldera. It wants Christina, and I can see exactly what losing her would do to us.