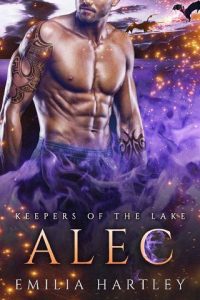 She’s loved him since before he changed her, but he won’t even admit he remembers her.

Charlie wasn’t always a dragon, but she was always trouble. Getting turned as a teen only intensified her struggle against authority. Her parents never knew what to do with her. Neither did the dragon clan they passed her off to when she became too much for them to handle. Charlie was never meant to be a submissive, but for years she’s been ordered around, insulted, and shamed until she barely recognizes herself. In a last bid to recover some dignity, she seeks out the man she’s almost sure is her fated mate, the dragon shifter who changed her.

Now, if only he would recognize her the way her heart recognizes him.

Of course, Alec recognizes Charlie. He would know her anywhere. His soul calls to hers. He wishes she hadn’t shown up on the clan’s old stomping ground, though. It isn’t safe in the old cabins near the lake. Alec’s best friend Zane has been caught in the lake for so long that he’s become a monster. Alec feels guilty enough about that mistake. He refuses to let Zane hurt Charlie. So, he must pretend he doesn’t know Charlie. That way, she’ll go far away from the lake, and Zane won’t be able to hurt her. She’s in danger every moment she stays.
Unfortunately, Charlie’s clan may be every bit as unsafe for Charlie as the lake. Whether she stays or she goes, Alec could lose her—permanently.