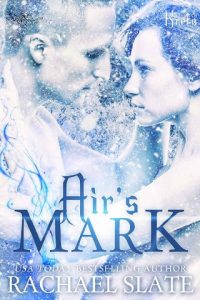 She’s firmly rooted
Airla and her nymph sisters, the Hamadryades, are cursed. Bound to the trees from which they were birthed, they’re slowly dying in a frozen wasteland. When the last leaf from Airla’s branches freezes, so will she. Yet beyond her reach lies the one male who can set her free. Only, he’s the one who cursed her in the first place. And she’d rather turn to ice than trust him again.

His mark lies on the wind
As a lone wolf shifter, Lord Lycus of Krete follows no one’s path. While his brothers are off searching for an army to free their centaur race, he wanders into the frigid northern barren lands, where no one exists. Or so he thinks. The only thing not frozen in this wasteland is the seductive Airla’s fiery wrath. Until one touch changes everything and a love denied just might blaze hot enough to melt even her glacial defenses.

Caught in a whirlwind of Fate
Lycus vows to set the Hamadryades free once more. Except, their trees are frozen and moving them might shatter not only their grove, but their entire race. Together, they’ll have to skirt the edges of danger and thwart a god, risking their lives and their hearts to change the direction of their destinies.