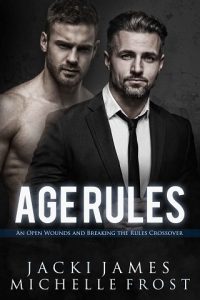 I was still too old for him, and he was still too far in the closet for me, but damn, if I didn’t crave him like a drug.
After spending twenty years serving in the US Navy while Don’t Ask Don’t Tell was in effect, Darren Davis is unapologetically out and proud. He knows exactly what he wants in a relationship, and up and coming MMA star Andre Harrison isn’t it. He’s too young, his time in Austin is too fleeting, and he’s definitely way too far in the closet. All Darren has to do is convince his traitorous heart that Andre isn’t the man for him.
It’s true what they say, one phone call really can change your life. Rushing home to Austin when his former hockey star father has a heart attack puts Andre Harrison on a path he hadn’t allowed himself to imagine. Between trying to mend his father’s health, keeping his MMA training on schedule, and hiding his growing attraction for hospital President Darren Davis, he finds himself succeeding on all counts except one. Try as he might, he can’t deny the connection he feels with the sexy silver fox, and wonders if something real could grow between them if they’d only break their own rules and give their feelings a fighting chance.