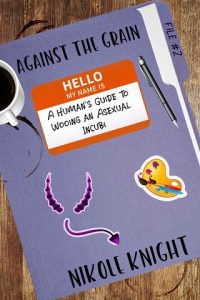 The first step to recovery is admitting you have a problem…

Ellian has a problem, and its name is Felix Masters. When Ellie, a high society succubus, joins Against the Grain, he has a foolproof plan: attend the support group for supernatural misfits, discover the secret to correcting his… abnormality, and then return to the Incubi compound to join his incubus betrothed. It is a good plan—it is the only plan. Because failure is not an option, not this time. For once in Ellie’s controlled, suffocated existence, he will bring honor to his family name, regardless of the personal cost. That is, as long as a sweet, sweaty human does not mess up his carefully laid plans.

Felix Masters has a problem, and its name is Ellian. Felix never meant to stumble into a therapy group for magical oddballs, but when a beautiful periwinkle boy with sad eyes defends him against a feral vampire, Felix’s world changes forever. Magic, glamour, and succubus tails are only the beginning, and the more he learns about Ellie and his mystical, albeit unjust life, the harder it is for him to fight the Incubi’s magnetic pull. Felix has always had a weakness for a pretty face, after all—and periwinkle happens to be his favorite color.

An asexual succubus trapped by fate and expectation. An insecure human desperate to set him free. Join Felix and Ellie as they—with a little bit of magic and a lot of luck—find acceptance, courage, and unconditional love in the one place they never expected: each other.

Against the Grain is a shared world trilogy full of awkward characters, hilarious meet-cutes, and hard-fought happily ever afters. Each book in this urban fantasy rom-com can be read as a standalone.

Possible triggering material includes: Supernatural culture “norms” that border on child abuse (past), emotional abuse, and dubious consent (non-graphic/off-page). One character struggles with a form of gender dysphoria and self-harm manifesting in a type of eating disorder. Side note: mpreg exists in this magical race/universe, but it is not featured on page or experienced by the main characters.