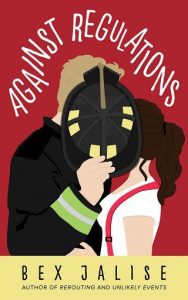 Tori Keller can be called many things, but coattail rider isn’t one of them. Kellers don’t quit. Kellers earn what they get. Valuable lessons her father made sure she learned at an early age. Being a woman candidate in the Chicago Fire Department isn’t an easy job. Being the daughter of the late Chief Keller, with the eyes of the whole department on her, is even harder. Lieutenant Jon Nichols didn’t get a chance to thank his mentor for all he’d done for him before he died. So, when Chief Keller’s daughter is assigned to his command, Jon vows to train her to the best of his abilities, despite his growing admiration for the stubborn candidate and the strict non-fraternization regulations meant to protect them.Faced with department politics and their own misgivings, Tori and Jon are drawn together even as they deny their growing bond. But as manipulations and regulations come between them, Tori relies on the lessons from her father to see her through. Because if she really wants the lieutenant, she’ll have to fight for him. Kellers earn what they get, after all.