Home
Paranormal / Sci-Fi
After the End of Us by Melisa R. Hightower (ePUB) 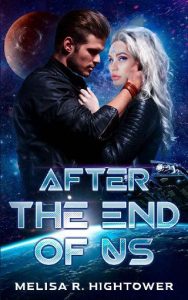 After the End of Us by Melisa R. Hightower – Free eBooks Download

She longs to escape to a far corner of the universe. His uncompromising approach masks his loneliness. Will these old flames ignite cosmic chaos?

Captain Erina Asande-Katur trusts no one. Exiled after exposing her ruthless cousin’s betrayal, the disgraced royal runs contraband across the stars to earn enough credits to safely hide her daughter. And when her scheming relative kidnaps the child and holds her hostage, she gears up to provide the demanded ransom of smuggled tech.
Special Agent Alesandrian Syntero lives by the book. Exonerated after being falsely accused of treason, he’s determined his every action will be unquestionably above board. But when he hunts down an illegal shipment of body-theft technology, he’s stunned to find the alluring woman who broke his heart at its helm.
As Erina fights returning feelings for the man she thought was dead, she dares not put her daughter’s life at risk by rekindling the affair. And while Alesandrian wavers between arresting and kissing the gorgeous fugitive, he fears sticking to the letter of the law will only lead them both to a black hole of misery.
Will the wary couple give in to their desires, or will their future implode in a supernova of despair?