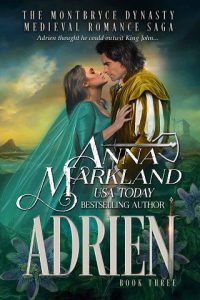 Adrien thought be could outwit King John…
The third son returns to Montbryce after an absence of eight years. He’s been in England, masquerading as a de Quincey and trying to infiltrate King John’s inner circle. Sent by John as an emissary to a council of war in Flanders, he is unmasked as a spy.

Ensnared
As if that isn’t bad enough, he finds himself trapped into marriage and forced to flee with his unwanted bride.

Her last hope
Marissa d’Ascq sees marriage to Adrien as her last hope of escaping her mother’s cruel tyranny. Little does she know the dangers she and Adrien will face in their flight.