Home
contemporary romance
Adored By You by Jess Mastorakos (ePUB) 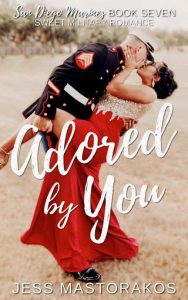 Can the sergeant and the celebrity get their second chance?

Sergeant Noah West was eighteen years old the last time he saw Paige Walker. He joined the Marines for a more stable life and she left to chase her movie star dreams. But no matter where the Marine Corps sends him, he can’t help but hope that their paths might one day cross again.

Paige was catapulted into stardom when she landed the role of a lifetime on what would become one of prime time’s biggest medical dramas. After eight years on the show, she’s ready for a change. There’s just one problem—no one thinks she can play anything other than the role that made her famous.

In a happy twist of fate, Noah and Paige are reunited thanks to a film opportunity in San Diego. She’ll need his help to secure the part, but Noah isn’t willing to let their relationship be purely business. As old fires spark back to life, can they pick up where they left off despite the scars from their time apart?