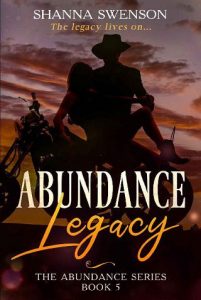 Legacy binds a family together… but the Kinsen/Butler legacy is in peril.
Kinsen Ranch and Starlight Valley have seen many years pass. There’s been love and laughter, tears and triumphs, successes and failures…

Four relatives are in line to inherit the horse ranches that’ve made their families famous:
Dallas is thriving as a veterinarian alongside her father, Jackson has come of age as heir to the dynasty, Savannah is a valuable asset at NASA, and Morgan owns his own construction company.
Savannah Kinsen has just been dumped by her fiancé of three years, and kicked out of her Houston apartment. It’s back home to Abundance for her, tail set firmly between her legs. As an astrophysicist, she’s been thrown completely out of orbit and her day only gets worse when she meets a hot-headed–albeit drop-dead gorgeous–cowboy who wants to steal an antique rocking horse out from under her in a toy store. Hell hath no fury, and Savannah’s a woman now fully scorned as she unleashes on him.
But she’s in for a big surprise come evening when where else does she end up meeting that same cowboy but the notorious Rusty Spur? Fate is funny like that and this Austin character seems far too swoony to be true. Savannah only thought she’d been thrown for a loop, for the chaos theory has nothing on this night, and the axis that her life was on has shifted–Ready or not!
Morgan Butler is the one and only son of Nate Butler. He’s an upstanding citizen of Abundance, holds a seat on the town council, and he’s a successful entrepreneur. The only thing missing in his life is a woman, and he’s only ever loved one–Kelsey Boyd. But the scars of their past have never healed and possibly never will. He’s tired of living without his true love and just when he decides he’s not going to ever again, a dangerous man storms in and threatens everything. His name is Max McClintock and he’s made a target of the Butlers and Kinsens…and their land.
Jax Kinsen’s life is exactly how he expected it would be. He’s got two loving parents, two amazing sisters, a ranch that’s on the map, and the girl of his dreams…or does he? When Cassidy Boyd gets an acceptance letter to Emory University, Jackson can’t see past his hurt and pain long enough to be proud of the free spirit dwelling inside her. She’s always longed to get out of Abundance, which is a direct contrast from what he wants. His heartbreak is all-consuming, until the shining Stella Jenkins shows up one day needing lessons and has him reeling. Can Stella heal all that ails him or will Cassidy have a change of heart?
Savannah, Jax, and Morgan all have a lot at stake. Their legacy is in jeopardy. All they’ve inherited stands to fall. Can this family battle darkness–once more–and come out intact?