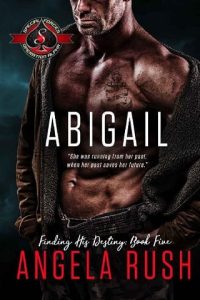 Abigail Miller’s life had been anything, but easy. Watching her mother die during a police raid on a drug house, left a lasting impression. She’d survived the night with the help of Robbie an older boy who sheltered her from the chaos. She’d never seen him again. Being abused for years by her father then a string of bad relationships, when her daughter, Ellie, is born Abigail determined to get away from the abuse. Things don’t go as planned, and she ends up on the run with her daughter, trying to stay one step ahead of authorities. After years on the run, she settles in San Diego working in a prominent hotel. When the local Naval base hosts a training session, Abigail comes face to face with two men from her past. One her savior and the other an executioner.
Robert Ford a.k.a. Straw is a Marine Special Forces Operator. His team travels the globe keeping America safe. They work hard and play harder. A far cry from the rough upbringing he’d had. Straw, a playboy with cheesy pickup lines, never lacks for female companionship. As men on the team begin to settle to family life, Straw craves the same but knows his poor upbringing and genetics don’t bode well for him. Besides he longs for a girl from his childhood who haunts his dreams. When Straw checks into a swanky hotel in San Diego for a two-week training session, he sees the literal siren of his dreams working behind the desk. He’s drawn to her, knowing she’s destined to be his, but her past comes back to haunt them to keep them apart.
Can Straw save Abigail from her past, protect Ellie from a psychopath, and secure a future for them? Will it end in happily ever after or blow up in their faces?