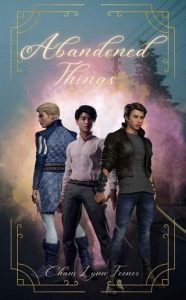 Frankie is a fifth-year college student with a secret. He’s the writer and creator of the popular web novel Gold and Silver. At least, he thought he was the creator of it.

That belief is tested when one night Rook, the book’s fan-favorite anti-hero, shows up outside Frankie’s apartment, alive and very much real. Frankie isn’t supposed to pick a favorite, but the wayward demon prince has always been his. Now that they’ve actually met, however, he finds keeping up with Rook’s capricious nature exhausting at best and infuriating at worst. When he demands that Frankie rewrite the upcoming ending of the series, Frankie tries to resist, but Rook is known for getting his way, and he’ll do anything and everything in his power to make sure Frankie complies with his wishes.

Rook Dalibor is the demon prince of the Bronze Kingdom, known for being clever and calculating. At least…that’s who he’s always thought he was.

After dying to protect someone, Rook wakes up in a strange land with even stranger people in it. There, he discovers Visera, his world, and everything in it is actually just part of an elaborate story written in a book. After reading the first two volumes, he’s livid to discover that not only may he be the creation of some random writer, but he’s also not even the main character. Determined to correct his story and prevent his untimely end, Rook sets out to force the writer’s hand.

What starts out as a tumultuous relationship quickly turns into something else when they discover that Rook isn’t the only character from the book that’s entered the real world. Neko, one of the secondary villains has also found a way through the gateway, and he’s brought his shadow monsters with him. Setting their differences aside, Rook and Frankie form a tentative truce to deal with Neko as they try to figure out how the gateways came to be and what the rules for traveling between realms entail. Along the way, Rook starts to realize the two of them may have more in common than he initially believed. But just as he starts to acknowledge he may have feelings for the writer, Sage, the main character in Frankie’s story, suddenly appears.

Rook wants his happy ending, but what if he’ll only be happy if he ends up with Frankie? Can he convince the writer to forget about the fact they started out as enemies and win him over, or will he forever be destined to play the part of the second male lead?

*This is a slow-burn adult novel featuring a morally gray anti-hero and a writer trying to deal with old wounds. Please keep in mind there are themes in this book not suitable for younger readers, including explicit sexual scenes, violence, and a male lead who sometimes takes things too far. If you’re looking for a knight in shining armor, Rook isn’t the prince you’re looking for. This is an enemies-to-lovers story and he isn’t afraid to get his hands dirty. Trigger warnings include mention of an alcoholic parent, childhood trauma, and minor dub-con.