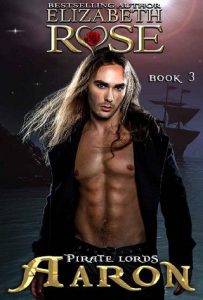 He never meant to fall in love with his rival’s granddaughter!

Pirate lord Aaron Fisher carries on the search for his late father’s hidden treasure. His newfound grandmother, Nairnie, is still aboard, refusing to leave his ship. Even so, Aaron vows not to bring any more wenches aboard because they only seem to bring bad luck.
When Aaron goes to shore to find new crewmembers and pick a few pockets, he ends up being a victim instead. He recognizes the woman who has stolen from him, and she is working with his biggest rival, the old crusty pirate named Nereus. To his horror, he discovers that she’s stolen the only clue that will lead to the hidden treasure.

Miriam MacAvey has noble as well as pirate blood flowing through her veins. After her noble mother is executed, she flees the castle to live with her pirate father aboard the Poseidon, her grandfather’s ship. It’s not long before her father dies in battle and she is put under her grandfather’s care, even though she fears the evil man. She tries to earn Nereus’ respect, and steals a clue to a hidden treasure from the handsome pirate lord named Aaron. However, before she can return to the Poseidon, Aaron and his new crewmember, Bear, catch her and recover the clue. In anger, she lies and tells them it doesn’t matter since she’s already seen the words upon the parchment. This only works as a disadvantage. They decide to take her captive aboard their ship, the Falcon.

Warring pirates, two thieves that pass in the night, and one clue to a hidden treasure. With a feisty old grandmother named Nairnie and a man named Bear who dodges her flying ladle and constantly ruffles the woman’s feathers, Aaron has more than his share of worries and distractions. The last thing he needs is to fall in love with his beautiful captive, who he eventually discovers is none other than his biggest enemy’s granddaughter!

Will the quest of a promised treasure be enough for Aaron to leave behind the troublesome girl who has stolen his heart? Or despite of who she is, will the girl end up being a treasure to him worth more than any silver or gold?