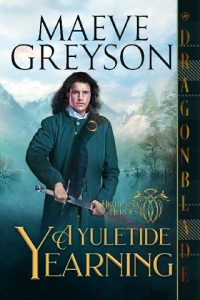 Regret is a sly enemy…
It isn’t that Tait Mackenzie regrets his life of pirating and plundering, but he’s getting older. And it’s Christmas. And he’s lonely. Especially since foul weather has him stranded at his hideaway instead of spending a joyous Yule with his cousin and her little ones who adore him. Never before has he thought about missing a life with a good woman and children of his own, but he’s thinking about it now. When he dies, what will he leave behind? Nothing more than fleeting memories from those who either loved him or hated him or both. But what woman other than a harlot would settle for a life with a pirate lord?

If wishes and dreams were oceans and streams, she’d sail her way to happiness…
Ellie Hobbs loves Tait Mackenzie. Always has. Ever since the day her father found her, freed her from the workhouse, and brought her to Tait’s Cove. But Captain Tait doesn’t give her a second glance. After all, she is the daughter of his quartermaster and best friend. But he must like her a wee bit because every male at the Cove gives her a wide berth since Tait proclaimed her off limits as soon as she made landfall. He told everyone she’s a virtuous woman intended for better than them. The only one she wishes she was intended for is Tait. She tells the North Star that very wish every night. Even on Christmas Eve. Maybe someday her wishes will come true.
Can three pirate ghosts on Christmas Eve scare some sense into a Scottish rogue and make him see that the love he needs has been right in front of him all along?