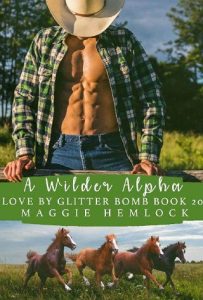 Omega, Bryn ‘Ears’ Canton, has made himself known as a carriage driver, horse whisperer, and of course, baker of pies in the Guardians of Glitter Bomb territory. He’s made a few friends along the way but has mostly kept his secrets close to his heart. He’s hopping along through life just fine and has even added a best friend with benefits to his list of things he doesn’t talk about with other people. He might’ve sailed along life on mostly smooth waters, except while he was out herbing early one morning, he and his horse come upon an unconscious man who appears to have fallen from the sky. While finding a comatose man is never ideal, it’s a major problem when he’s also your true-mate and your friend with benefits is still asleep in your bed from the romp the night before.

Alpha, Wilder, didn’t have a choice about leaving his birth herd. He was literally tossed out on his ass, and his landing was anything but graceful. He’s plunged into a new world with rules he’s not entirely sure of, and memories of friends who betrayed him haunt him even as war is waged just outside of the new territory he calls home.

Will love be enough for this unlikely pair of true-mates to overcome the obstacles before them, or will their pasts be too much to overcome?