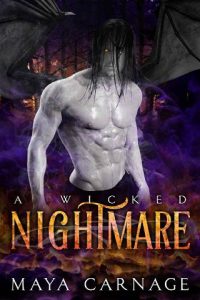 One sunny day, the ground split open, and thick grey smoke spilled out, covering the world by nightfall and changing the earth forever.

It happened so quickly that Senna didn’t have a chance to pause and react. Too soon, they realized the smoke wasn’t alone. Monsters clawed their way out of the crevice, screeching in the still air before darting after whatever unlucky person or animal caught their attention. Different species came crawling out, some were more animalistic than the others. They called them creatures, but the rest were similar to humans but with demonic features, such as horns, scales, wings, or fangs. More terrifying and dangerous than the creatures because they were after earth’s females.

You would think that would make it safer, but no. The demons despised earth’s men, torturing them when they caught them. But the women were mostly left alone except when a demon wanted her, and in that case, she prayed he was sane enough not to rape and murder her. Who would’ve thought being taken away, never seen again, would be a better option than the alternative? It gave them hope that everything would be okay. Stupid, silly hope, which she didn’t deal with.

That was for the people who believed the world could be good again, but she wasn’t so naive. She couldn’t be when she had to take care of her niece, which was why she ended up where she did. A demon with yellow eyes and black wings stole her and claimed she was his. Here she was stuck with a demon who growled more than he spoke, and he wouldn’t let her out of his sight.

Senna had to figure out a way to escape to get back to her niece. But the more time she spent with the demon, the less monstrous he seemed and that worried her. She couldn’t be falling for a demon, could she?